On Wednesday November 24th the Rossi-Doria Lecture 2021 titled: “Energetic transformation. An economic, geopolitical and social turning point” was held at the School of Economics and Business Studies of Roma Tre University. 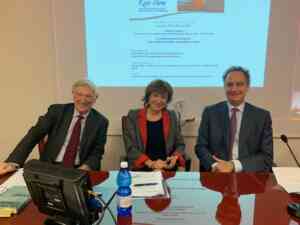 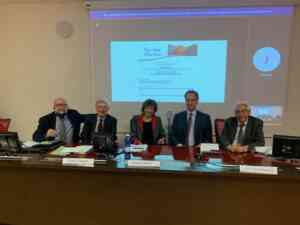 Check out the poster of the event, which was also broadcasted in Live Streaming.

Slides of the event.

Enrico Letta, European Integration and a New Global Dimension. The EU between China and the USA.

Abstract. The incoming European Legislature is not like any other. In the last five years the European and global context has deeply changed. Logics and solutions framed in a business “as usual” mentality cannot respond to the demands and needs of European citizens. The challenge between the United States and China makes it clear that we live in a world that is no longer Eurocentric, where Europe plays its strategic independence and, therefore, the possibility of shaping its own future. For us Europeans, then, it becomes essential to understand that our values ​​never coincide with our interests today. This is the key to live up to the three great challenges that Europe must face: the migration issue, technological humanism and the sustainability of the planet.

Enrico Letta is Dean of the School of International Affairs of Paris, Sciences Po and President of the Jacques Delors Institute. On 1 June 2019, Enrico Letta was appointed President of APSIA, the world association of international business schools. He was President of the Italian Council of Ministers from April 2013 to February 2014 and Undersecretary to the Presidency of the Government Council led by Romano Prodi from 2006 to 2008.

Josef Schmidhuber, Key Trends and Challenges for Global Agricultural Markets in the Presence of Disruptive Technologies

Abstract. The Lecture provides an overview of key results and drivers for global agricultural markets over the next 10 years and beyond. It presents prospective changes in supply and demand of agricultural markets, trade and prices. In doing so, it also relates the results of the outlook to selected goals of the 2030 Agenda for Sustainable Development (SDGs), such as the prevalence of undernourishment or the GHG emissions from agriculture. The main thrust of the outlook is based on the OECD/FAO medium-term projections for global agricultural markets. Over and above these baseline results, a number of possible “disruptors” will be presented, all with a view to their potential of changing agricultural markets or their ability to accelerate the progress towards the SDGs. The disruptive trends and technologies will cover a wide range of possible innovations in food and agriculture, commonly known as “Agriculture 4.0”. They include artificial intelligence and machine learning, Distributed Ledger Technology, or new ways and instruments of financing sustainable development in agriculture and the SDGs more generally.

Josef Schmidhuber is Deputy Director, Trade and Markets Division, UN Food and Agricultural Organization (FAO).
He started his professional career as a consultant with the World Food Council, worked as an econometrician and economist with the FAO, as a senior economist with the Organisation for Economic Co-operation and Development (OECD), and as head of FAO´s Global Perspectives Studies Unit. He has assumed short-term assignments with other international institutions, including The World Bank and the European Investment Bank. His work has been published in numerous books, peer-reviewed journals, or as documents of international organisations such as the OECD, the Intergovernmental Panel on Climate Change (IPCC), and the FAO. His areas of interest include commodity market analysis and outlook; trade and investment in agriculture; global food and nutrition issues; climate change, as well as links between bioenergy and agricultural markets. He holds a M.Sc. degree in agricultural economics and a Ph.D. in economics from the Technical University of Munich. 1968 and was awarded his Ph.D. on the Economics of the Environment in 1975. He has held academic positions at the Universities of Princeton, Berkeley and Harvard in the U.S.A and at University College London and Bath University in the U.K. Professor Markandya has extensively worked on climate change; energy and environment issues, receiving several awards. He was one of the core team that drafted the IPCC 4th Assessment that was awarded the Nobel Peace Prize in 2007.
His research interests cover a wide range of resource economics issues in the areas of climate change; environmental valuation; environmental policy; energy and environment; green accounting; macroeconomics and trade. Some of his best-known works include: ´Blueprint for a Green Economy’, ´Green Accounting in Europe’, ´Reconciling Trade and Development’ and ´Cleaning the Ganges’.

Giancarlo Corsetti (Ph.D. Yale, 1992) is Professor of Macroeconomics at Cambridge University, fellow of Clare College and director of the Cambridge INET Institute. He has previously taught at the European University Institute in Florence, as Pierre Werner Chair, and the Universities of Rome III, Yale and Bologna.
He is a leading scholar in international economics and open macro with pioneering contributions on currency, financial and sovereign crises, monetary and fiscal policy in open economy, and the international transmission and global imbalances. His work has been published by the American Economic Review, the Journal of European Economic Association, the Journal of Monetary Economics, the Quarterly Journal of Economics, and the Review of Economic Studies. He has been a long-serving co-editor of the Journal of International Economics.
He is a consultant at the European Central Bank and the Bank of England and a regular visiting professor in central banks and international institutions. He is research fellow of the Centre for Economic Policy Research, where he served as co-director of the International Macroeconomic Programme between 2004 and 2015. He is a member the European Economic Association, where he served as a member of the council, and Program Chairman of the 2007 Annual Congress in Budapest.

To see the lecture, press here.

Abstract. The CECILIA2050 project has been set up to understand how policy instruments work in interaction, what factors determine their performance, and how the European climate policy instruments mix should evolve to guide the transformation to a low-carbon economy. The 2016 Rossi-Doria Lecture will describe the main findings of the project, particularly focusing on the policy implications emerging from the cooperation between the scientific European teams involved and the stakeholders consulted during the three-years project. There emerge several advices to policy makers on how to improve the economic efficiency and environmental effectiveness of the instruments mix, and how address constraints that limit their performance or feasibility. The latter include public acceptance; availability of finance and the physical infrastructure, as well as the administrative and legal framework

Anil Markandya is Professor of Resource Economics, leading the Basque Centre for Climate Change as Executive Director from April 2008. He graduated from the London School of Economics with a Master of Science in Econometrics in 1968 and was awarded his Ph.D. on the Economics of the Environment in 1975. He has held academic positions at the Universities of Princeton, Berkeley and Harvard in the U.S.A and at University College London and Bath University in the U.K. Professor Markandya has extensively worked on climate change; energy and environment issues, receiving several awards. He was one of the core team that drafted the IPCC 4th Assessment that was awarded the Nobel Peace Prize in 2007.
His research interests cover a wide range of resource economics issues in the areas of climate change; environmental valuation; environmental policy; energy and environment; green accounting; macroeconomics and trade. Some of his best-known works include: ´Blueprint for a Green Economy’, ´Green Accounting in Europe’, ´Reconciling Trade and Development’ and ´Cleaning the Ganges’.

Michael Ash, Jobs Versus Environment? Assessing the Jobs-Environment Relationship in the US

Michael Ash (Ph.D., Economics, University of California, Berkeley, 1999) is Professor of Economics and Public Policy and Chair of the Economics Department at University of Massachusetts Amherst. His areas of research are: labor, health and environmental economics, examined through quantitative models. Ash’s main interests in environmental policy include disclosure and right-to-know laws, greenhouse-gas policy, and environmental justice.
In 2013, Herndon, Ash and Pollin critiqued the argument of Harvard University Professors Reinhart and Rogoff that high public debt strangles economic growth. Herndon, Ash, and Pollin were named among Foreign Policy Magazine 100 Leading Global Thinkers of 2013.

Alain de Janvry, The Logic of Peasant Household Behavior and the Design of Rural Development Interventions